You are here: Home / All Posts / Dating the government printer 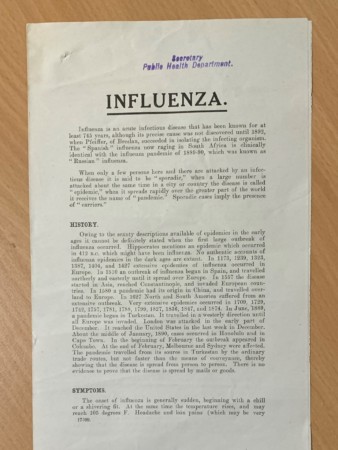 ALWAYS LOOKING FOR WAYS TO DATE THE UNDATED. This brochure about influenza is undated. A close read only tells us that it is post the ‘Russian influenza’ pandemic of 1889-90  which arrived in Melbourne and Sydney in the beginning of February 1890, having come through Honolulu, Capetown and the then Colombo. Also it makes no reference to the Spanish Flu. It is very tempting to think it dates from 1918-19.

The only other clues are that:

Tt seems likely that Herbert George Green was Acting Government Printer four years prior to his time as the GP. A Trove search of publications shows that Mr Green was filling in while Mr Mullett was overseas. The newspaper extracts show that he left Australia around 12 July 1918 and returned six months later, on 12 or 13 January 1919.

So this brochure was published in that period – second half of 1918.

State Printer Goes to U.S.A. Mr A. Mullett, the Government Printer, will leave at the end of next week for the United States and Canada on an official business trip, and will be absent about four months. He will visit the Government Printing offices at Washington and Ottawa, and large private printing establishments. Inquiries will also be made by him regarding paper and other supplies required by the State Printing Office. Herald (Melbourne), Monday 1 July 1918, page 6

STATE PRINTER RETURNS BUSINESS TRIP JUSTIFIED
Mr A. Mullett, the Government Printer, who, returned to Melbourne today after a visit to the United States and Canada said that the success of his business mission justified his trip. Even taking into account that the war was over and that the prices of paper would fall to some extent, Mr Mullett said that at the rate at which he was able to secure supplies from Canada and the United States he considered he had made a good bargain for the State. He had visited several Canadian paper mills, and had interviewed United States paper merchants. On the whole, he thought he had done fairly well. He would sup ply a report regarding details to Mr M’Pherson, the Treasurer; Mr Mullett will resume duty tomorrow morning. Mr. Mullett was met at. the train today by Messrs. T. E. Meek. chief clerk of the State Treasury, and H. J. Green. Acting Government Printer, and other officials. Herald (Melbourne), Monday 13 January 1919, page 8

FURTHER REFINING OF THE PUBLICATION DATE

When did the Public Health Department operate?

No joy googling this, could not find a document tracing the names and dates of name changes online, although there is bound to be one.

This was the beginnings of the Commonwealth Serum Laboratories.

FEDERAL SERUM LABORATORY
The Minister of Customs was to day favourably impressed by the representations of a deputation from the Hospital Supplies Board suggesting the establishment of a Federal laboratory for the manufacture of serum and vaccines and promised that he would consult the Cabinet in the matter. Ovens and Murray Advertiser (Beechworth), Wednesday 22 September 1915, page 2

…..The Quarantine department was experimenting with vaccine from cases that exist here; but to get the satisfactory vaccine it will be necessary to get the organisms from a natural case of South African influenza…..Age (Melbourne), Monday 14 October 1918, page 8

Australian-Made Vaccine.
Vaccine manufactured from the organism which was responsible for the recent epidemic of influenza in Australia has been prepared at the Federal serum institute at Royal Park for use in the event of Spanish influenza reaching the Commonwealth from South Africa

Before embarking on the preparation of the vaccine, the director of Quarantine (Dr. Cumpston) wasin communication with America, and it appears reasonably certain that there is little difference between the organism in the two place. Information from South Africa, with the exception of one detail, suggests the same similarity, but to assist the department in its precautionary measured cultures of the South African organism have been cabled for, and, will be shipped to Melbourne at once. Argus (Melbourne), Tuesday 15 October 1918, page 5

INFLUENZA OUTBREAK. PUBLIC HEALTH DEPARTMENT TAKES ACTION. HINTS FOR EXTENSION PREVENTION.
The Public Health Department, in a circular letter to the City Council, received yesterday, regarding the outbreak of virulent influenza, it was stated that from information received from South Africa, it is learnt: that the influenza bacillus is associated with two other organisms known as micrococcus catarrhalia (cause of common cold) and a sheptococcus [sic]. With the information at present available it cannot be definitely stated whether the presence of these organisms are or are not responsible for the virulence exhibited. The Federal Government is in constant communication with the South African Government, and the information thus obtained is immediately sent to the Health Department. Action has been taken by the Federal Government to prevent any personal communication with Australian-bound vessels while in South African ports. All vessels arriving, from South Africa will be placed in quarantine, and all persons on board disinfected. The Federal Serum Laboratory has manufactured a large quantity of influenza vacinne [sic] and this will be made available as required. Bendigo Independent, Friday 25 October 1918, page 5

So this brochure was published in the second half of 1918, and relying on the newspaper reports, it looks like we can say with some certainty it was published after 15 October 1918 as there was no Australian vaccine until then.

Mr. John McGarvie Smith, the well-known Australian scientist, died on Friday afternoon at the age of 74 years, at his residence, Holdsworth street, Woollahra, from an attack of influenza, which developed into pneumonia. He was best known as the scientist who presented to the State his secret of making anthrax vaccine. In addition to giving this secret formula to the country— the value of which is difficult to assess, but which the scientist himself placed at £1,500, 000— Mr. McGarvie Smith endowed the new institute to the extent of £10,000, and also presented to the institute his fine laboratory and equipment, estimated to be worth alone several thousands of pounds. He was a man of striking personality and great determination. Mr. McGarvie Smith had travelled extensively in Europe and America, where he inspected many scientific laboratories. He married the widow of the Australian orator, Mr. Daniel Henry Deniehy, but she predeceased him by many years. He has left no children. Daily Examiner (Grafton), Monday 9 September 1918, page 2

Looking for assistance? Contact the ESA with your research and collection inquiries. Our membership base consists of highly knowledgable experts and enthusiasts.     … END_OF_DOCUMENT_TOKEN_TO_BE_REPLACED

Benefits of membership - two (sometimes only one) journals and four newsletters each year; early bird access to the fair; member rates at ESA events and the joy of being part of a society of like … END_OF_DOCUMENT_TOKEN_TO_BE_REPLACED