It makes them even more special when they are signed by the old champions.

In recent times, not only have I been writing books – I am up to 67 currently – I have been publishing several in limited numbers including biographies of cricketers Wally Grout, Jimmy Matthews and CTB ‘Terror’ Turner through to my latest book, soon to be released, entitled Stuey, my life with Stuart Spencer.  Stuey is the story of the Melbourne and Tasmanian football icon written by his wife, Fay Spencer. 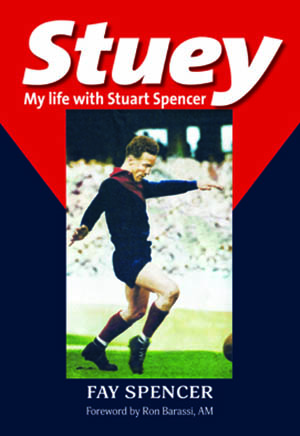 It is due to be published on March 1 in Melbourne in a limited edition of 400 hardback copies, the first 100 of which have been signed and numbered by Fay and Melbourne football legend ,Ron Barassi.

The limited edition is creating special interest with many of Spencer’s old teammates wanting the exact number they played in during their time at Melbourne with Stuart in the ‘50s. Barassi himself wants No.31, his famous guernsey number and Fay No.12, the number Stuart played in for six years at Melbourne, including the 1955-56 premiership double.

Stuey is 232 pages with 100 pictures, cuttings and illustrations plus some magnificent full colour endpapers and statistics which will delight. There is also an index, an important and necessary tool for those ‘surfing’ through the book.

Background to Stuey
Stuart Spencer is a football icon in Victoria and Tasmania. Best afield in back-to-back Melbourne premierships in 1955 and 1956, he left the mainland at the age of 24 when he was at the height of his fame. Victoria’s loss was Tasmania’s gain and in 1958 he was All Australian before his ultimate triumph when he led Tasmania to a historic victory over the mighty Big V.

Passionate, determined, highly gifted and caring, Spencer’s inspirational example and people skills saw him make friends from all walks of life. His many decorations include AFL Life Membership and selection in the Melbourne and AFL Hall of Fame and the Tasmanian Hall of Fame as player and coach. He and wife Fay, a Tassie girl, were married for 56 years. Fay is now a most energetic 80 years young.

This is both biography and Melbourne FC social history, a riveting account of a true Demon great.
One of his Stuart’s closest football mates and fellow AFL legend Ron Barassi, AM, has contributed the foreword.

Looking for assistance? Contact the ESA with your research and collection inquiries. Our membership base consists of highly knowledgable experts and enthusiasts.     … END_OF_DOCUMENT_TOKEN_TO_BE_REPLACED

Benefits of membership - two (sometimes only one) journals and four newsletters each year; early bird access to the fair; member rates at ESA events and the joy of being part of a society of like … END_OF_DOCUMENT_TOKEN_TO_BE_REPLACED