ONE OF THE GOOD THINGS THAT CAME OUT OF THE LINDT CAFE KILLINGS WAS THE RISE OF THE ‘I’LL RIDE WITH YOU’  OFFER MADE TO PEOPLE TRAVELLING ON BUS 373 FROM COOGEE TO MARTIN PLACE.

We note this offer (an ephemeral rather than concrete piece of good will) has been made into something 3D. We quote from ABC online.

A Melbourne woman and her friends have made 1000 badges bearing the #illridewithyou hashtag to hand out to commuters in the city.

The hashtag, which began trending worldwide on Twitter on Monday, was created to counter a potential anti-Muslim backlash over the Sydney siege.

Users tweeted messages declaring they would ride with anyone who was scared to take public transport because they were wearing religious dress.

Stephanie Speirs said she initially posted the idea as a comment on an article she saw on Facebook about the social media movement.

Ms Speirs said she thought a badge would be a good real-world way to let commuters know they were supported, and that racial comments would not be tolerated.

“I sort of felt like I couldn’t really come up with a good reason not to do it.”

After sending emails to a number of badge companies one wrote back offering to donate the hire of a badge-making machine and enough supplies to make 1000 badges.

Ms Speirs said it took her and her friends six hours to make all 1000 badges, which they planned to hand out to commuters at Melbourne’s Flinders Street Station.

Ms Speirs said it was important to her that the #illridewithyou movement had a life outside of social media.

“I realised that it was all happening online,” she said.

“Why not make a real-world hashtag as well?”

She hoped the badge would encourage others to speak up if they saw someone being harassed on public transport.

“Often people all hold their breath and look at each other and go ‘who’s going to say something’, and sometimes no-one says something.

“This is a good way for us to know, hey if I intervene, there’s some other people there that might back me up.”

She said the badge also sent a message to anyone who thinks racist or abusive behaviour is acceptable.

We can’t seem to hijack an image of the badge, so here is the link to the ABC with pictures.

@sarahtakesfotos This is an incredible idea, I wish I was in Melbourne to collect this badge and wear it with pride.

@sarahtakesfotos Good work. If you have any spare, I can organise distribution in Perth CBD. 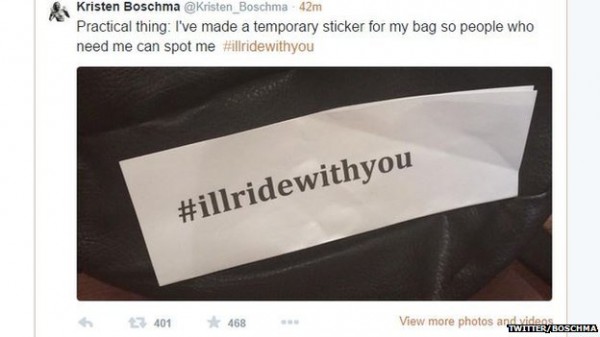 Looking for assistance? Contact the ESA with your research and collection inquiries. Our membership base consists of highly knowledgable experts and enthusiasts.     … END_OF_DOCUMENT_TOKEN_TO_BE_REPLACED

Benefits of membership - two (sometimes only one) journals and four newsletters each year; early bird access to the fair; member rates at ESA events and the joy of being part of a society of like … END_OF_DOCUMENT_TOKEN_TO_BE_REPLACED