You are here: Home / All Posts / ‘I’m the boy that brings the news, so a Christmas box I won’t refuse.’

STATE LIBRARY BLOG ABOUT CHRISTMAS USING EPHEMERA FROM THE WONDERFUL COLLECTION OF ED J. Blog by Kylie at State Library of Victoria. 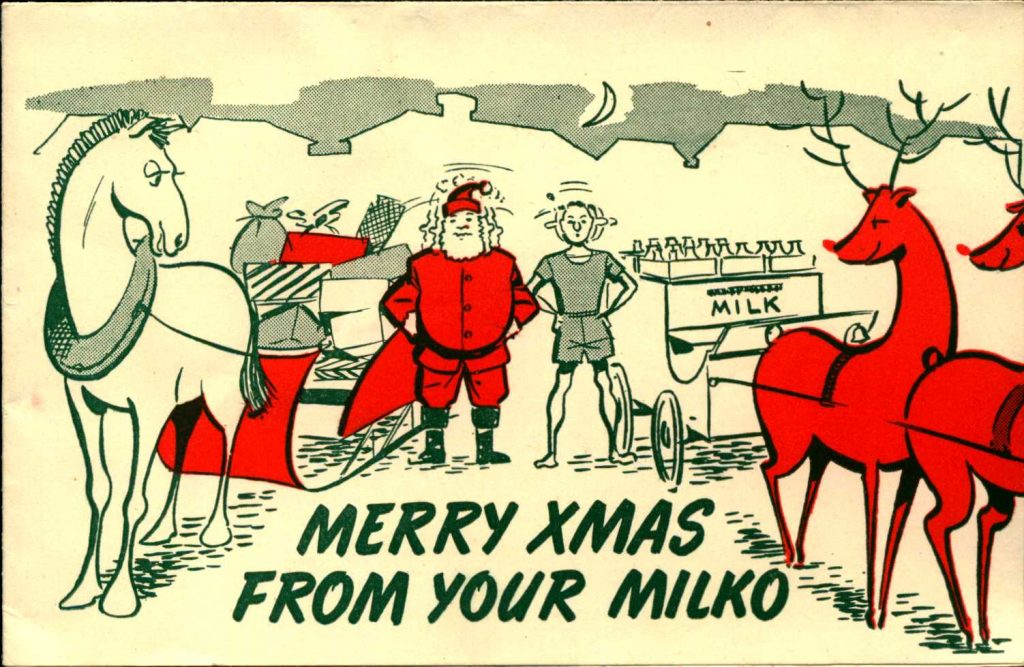 Two Christmases ago I received this query via our online Ask a Librarian service:

‘Prior to Christmas during the late 1950s and early 1960s in Melbourne, men who made home deliveries (such as ice, bread, milk) and the newspaper delivery boys, delivered small Christmas Box cards to many families. Each card had a rhyme (or ditty) on it extolling the virtues of their services. In return during Christmas week the family would leave an envelope out for the service men / boys. Inside was their Christmas Box money. Would you have any examples of these cards? I would value getting some of the rhymes. When I speak to locals in East Gippsland they have no idea what I’m talking about, so perhaps it was a city tradition.’

When I was a child growing up in the eighties and early nineties my dad would give our garbage man and our postie a 6-pack of cold beer at Christmas, to thank them for a job well done for the year. Largely gone are the days where people develop a close enough acquaintance, fostered by daily familiarity, with servicemen and women like their postie to warrant a Christmas gift. While the practice fits well with the general Christmas spirit of giving, I’d never heard of the term Christmas box for this practice, nor had I ever seen an example of one of these cards. 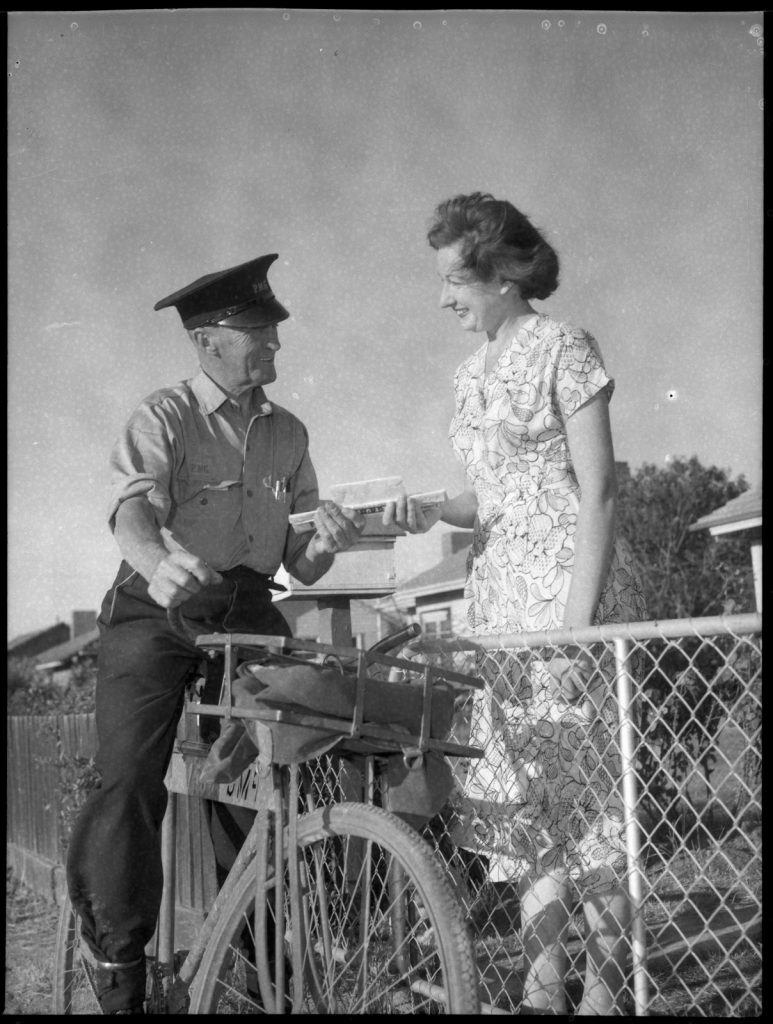 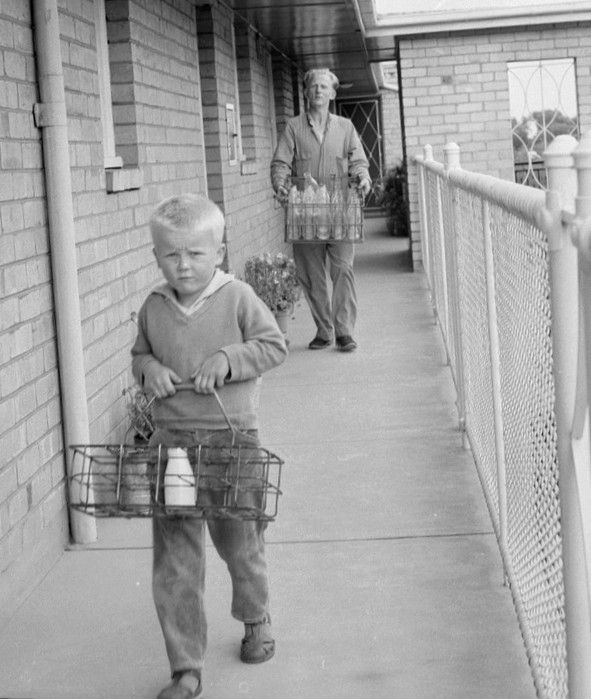 The origin of the Christmas box has been said to date back to medieval Catholic England – servants and apprentices would offer an earthenware box or jar to all visitors throughout the year for donations which at Christmas time would be given to the local priest as his shriving fee (to shrive meaning to grant absolution), literally the Christs-Mass box. [1] The tradition goes back even further to the Roman custom of presenting ‘New year gifts’. [2]

Around the seventeenth century this custom became less associated with the Church and more associated with employers giving money or presents to servants and other hired help at Christmas time. It’s likely this tradition also heralded from an earlier British practice where the wealthy allowed their servants the day after Christmas off to see their families – often giving them a box of gifts or food to take with them. [3]

Britain’s famous diarist Samuel Pepys recorded in his diary on the 19th December 1663: ‘Thence by coach to my shoemaker’s and paid all there, and gave something to the boys’ box against Christmas.’ [4] In fact, the origin of the name “Boxing Day” likely comes from this practice, with gifts traditionally being dispensed the day after Christmas, or the first weekday after Christmas, when people returned to work. [5] Eventually everybody employed by another, especially those who might be in a humble position, expected something from those they served. And just like Christmas bonuses today, the money was often used for making merry. 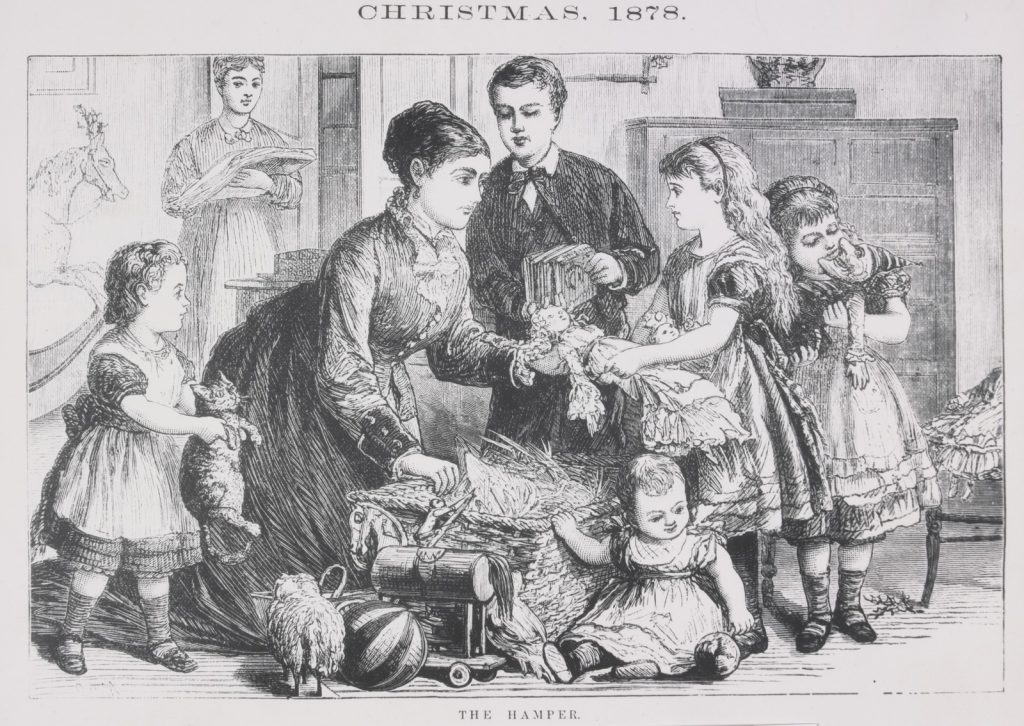 
By the eighteenth century the term ‘Christmas box’ came to be applied not to the box itself, but to the donation or gift that was placed in it. [6]

Servicemen and apprentices like newsboys, butchers, bakers, garbage men, postmen, milkmen etc. developed clever strategies to elicit these Christmas bonuses from their customers. To encourage generosity they would leave cards often with rhyming poems – the implication being that the continuation of good service would be ensured by a generous Christmas box.

I found some examples of these ditties in newspapers:

Out in sunshine, out in rain, still we sing the old refrain; out in sorrow, out in joy, still goes forth the paper boy. I’m the boy that brings the news, so a Christmas box I won’t refuse. [7]

The postman’s plea for a Christmas box (by Neanthes)

Whether drenched with the rain, or parched by the heat,
I’ve constantly trod, as you know, on my beat;
While your muffins you take, and your coffee you pour,
My first morning rat-tat sounds loud at your door;
Thro’ the whole of the year, how you list for my knocks,
So I ask you to-day for a kind Christmas box… [cont.] [8] 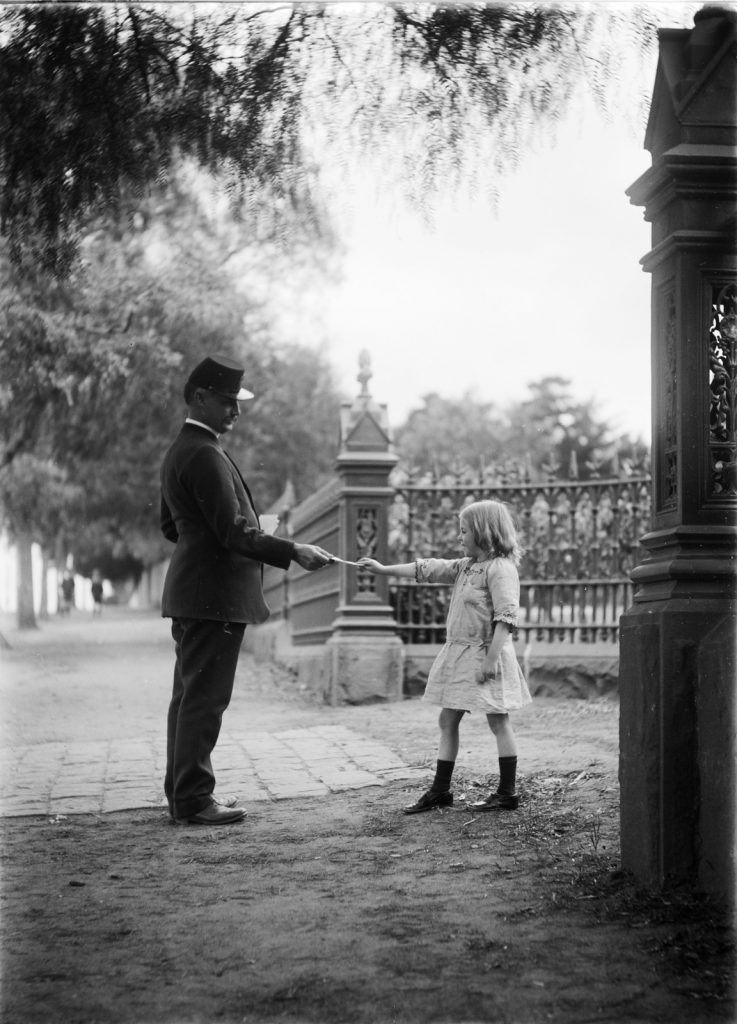 Some refrains showed much less imagination:

In winter or summer,
In sunshine or rain,
Your dustman has got to come
Round just the same. [9] 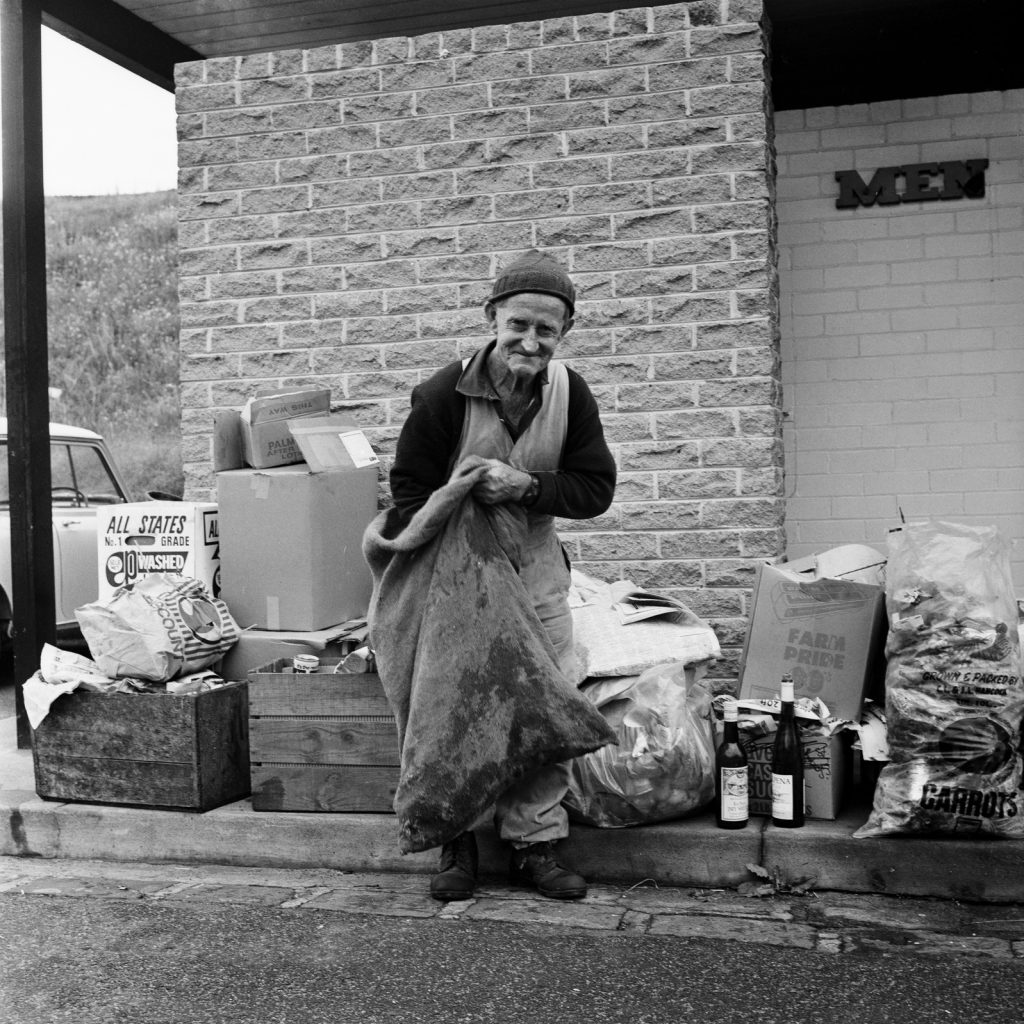 Not everyone was in favour of this tradition. In 1710 Jonathan Swift wrote: ‘I shall be undone here with Christmas boxes. The rogues of the coffeehouse have raised their tax…’. [10]  The Melbourne Punch called the giving of Christmas boxes ‘a terrifying system of taxation, one that fills the approach of Christmas with grim forebodings’ [11].

The Ephemera Society of Australia

These cards were largely ephemeral items and like most items of this nature (eg. menus, tickets, Christmas cards, handbills and posters, food labels etc.) they were created for a specific and transient purpose and were frequently not keepsaked or preserved. Where they have survived they are fantastic historical sources.

Luckily there is a group of individuals who have a personal and professional passion for collecting, researching, preserving and displaying these quirky, now often rare, examples of social history. Just when I was despairing of finding any real-life examples of Christmas box cards to feature in this blog, an email to the Ephemera Society of Australia rapidly turned up a member – former paperboy Ed J. – who had examples in his private collection. 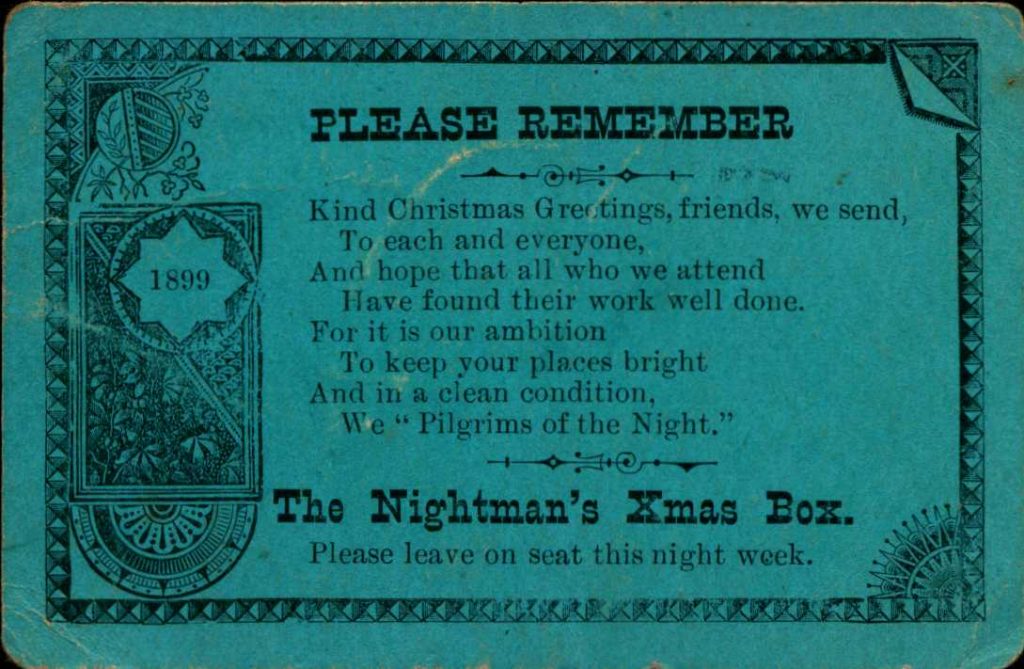 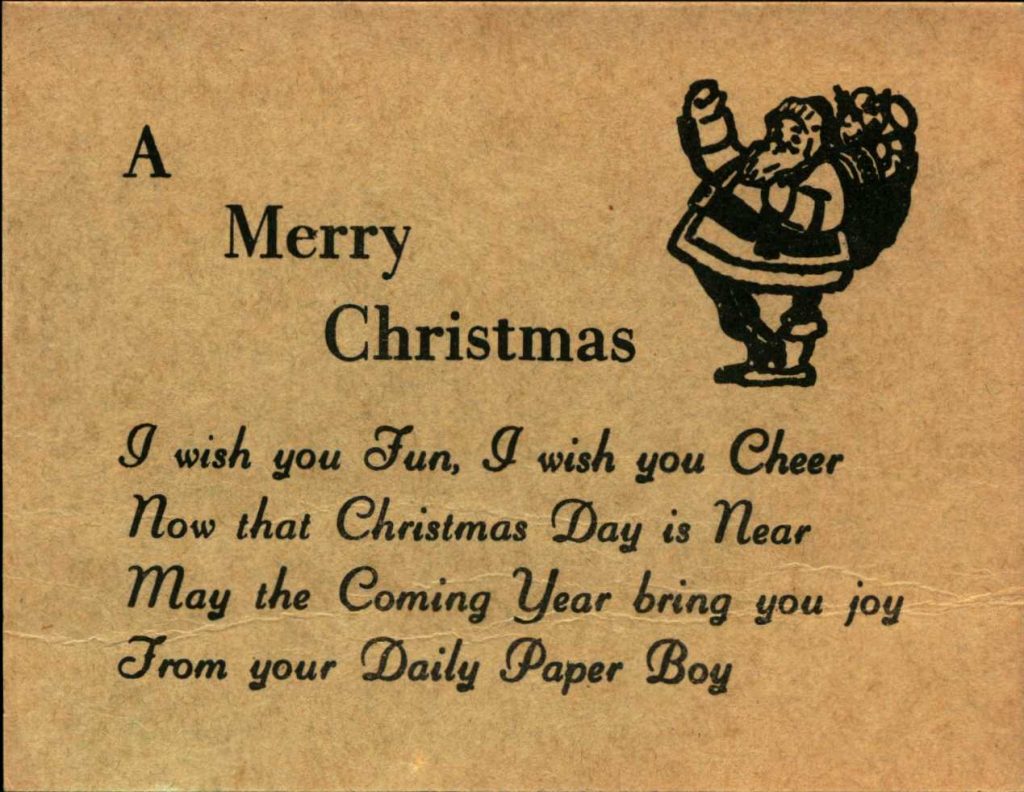 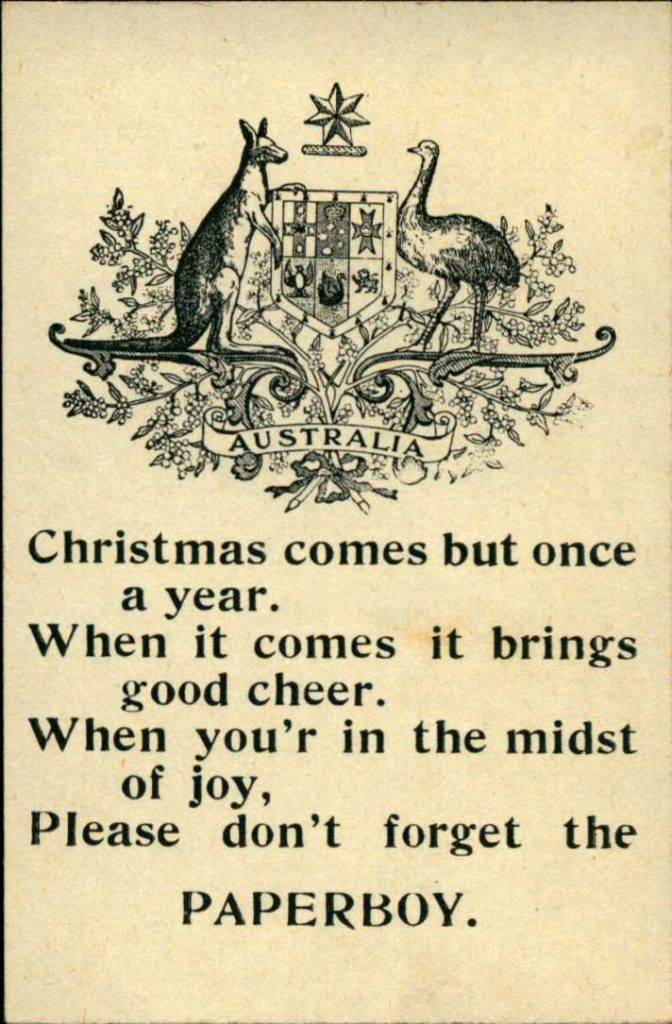 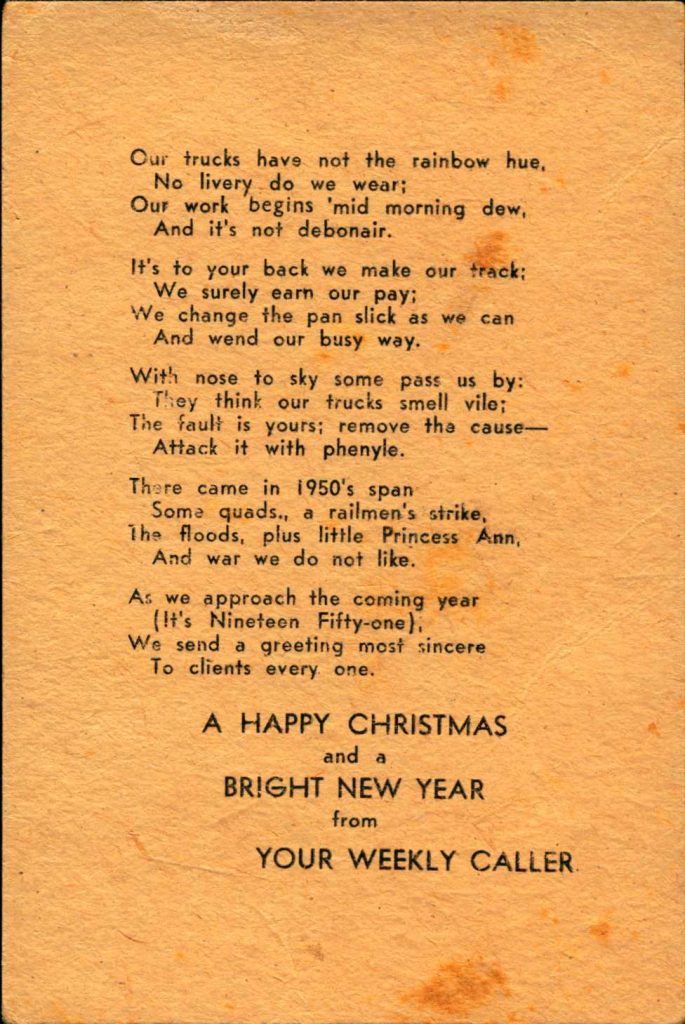 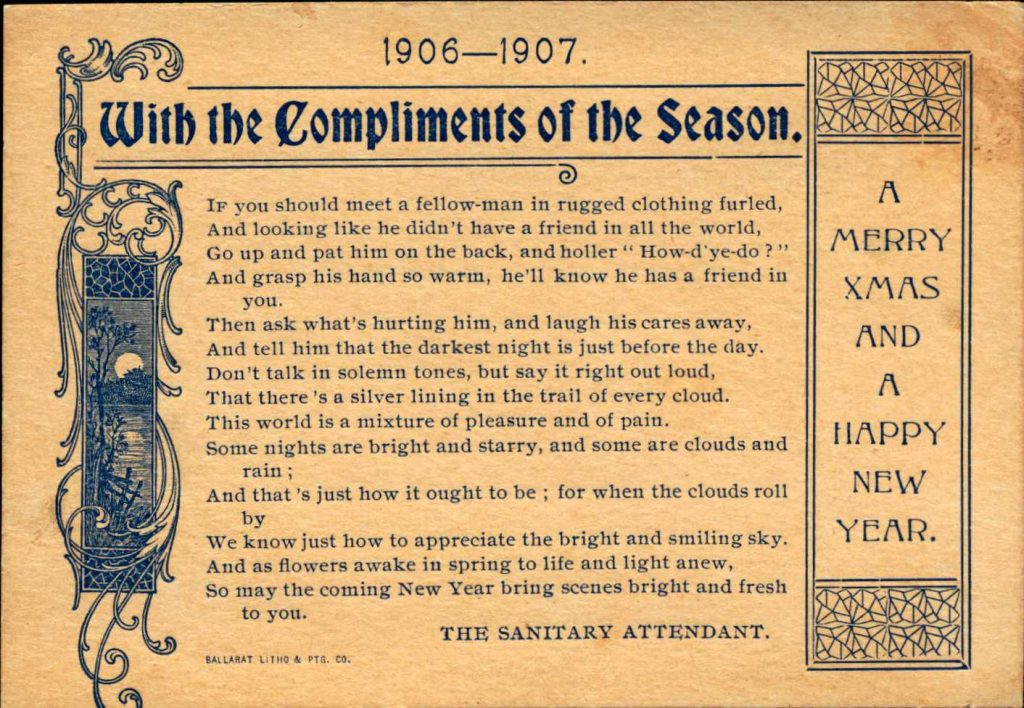 All images courtesy of Ed J.  Ephemera Society of Australia

So this Christmas remember to spare a thought for your paper delivery boy or girl, garbo or your postie, as all year long, in sunshine or rain, they come round just the same.

About the Ephemera Society of Australia

Since the Ephemera Society of Australia was inaugurated in 1987, its members have been actively sharing their passions for collecting ephemera across numerous categories using newsletters, journals, show & tells, exhibitions, ephemera and collectables fairs, symposiums, talks, outings and social gatherings. There is a strong focus on collecting Australian ephemera.

[1] Ancient Christmas customs and their origin.

[3] Christmas in the colonies / Maisy Stapleton and Patricia McDonald, p.45.

[4] The Diary of Samuel Pepys

Looking for assistance? Contact the ESA with your research and collection inquiries. Our membership base consists of highly knowledgable experts and enthusiasts.     … END_OF_DOCUMENT_TOKEN_TO_BE_REPLACED

Benefits of membership - two (sometimes only one) journals and four newsletters each year; early bird access to the fair; member rates at ESA events and the joy of being part of a society of like … END_OF_DOCUMENT_TOKEN_TO_BE_REPLACED