You are here: Home / All stories / Labels, I am attached to them 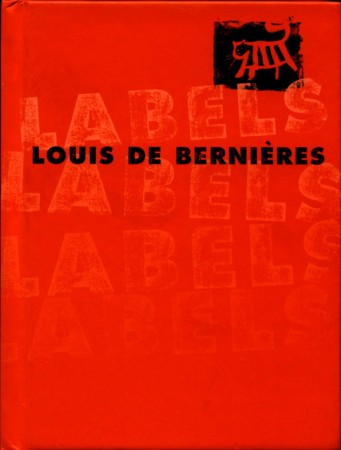 READING ABOUT COLLECTING; this little book Labels is really a short short story.

Labels was publisher Hardie Grant’s first book. It was written by the UK author Louis de Bernieres. The short story was published in 1998 in conjunction with the author’s arrival at Adelaide Writers’ Week. This facsimile copy was re-issued in February 2018 commemorating 20 years since its original publication.

In Labels the protagonist and generations of his family have had hobbies which occupied and pre-occupied them. The unnamed man here is bored by TV, and visiting a local shop he becomes intrigued by

‘the appealing eyes of a cat depicted on the label of a tin of catfood. it occurred to me that a comprehensive collection of catfood labels might one day be of considerable interest to historians of industry…’. 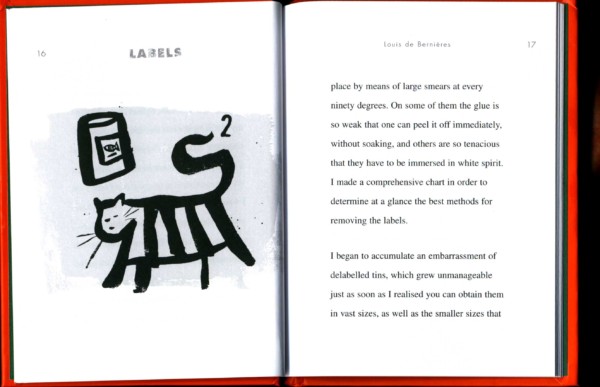 The collector goes over a multitude of collecting hurdles – he has to learn how to take the labels off the tins, and not all are glued on in the same way; there is a range of sizes, so he needs to get them all; there are homebrands as well as the better known ‘Whiskas’ et al; a trip to France introduces the necessity of collecting French and then Spanish catfood labels. His wife leaves overwhelmed by the number of albums of labels; he loses his job as his performance has been effected by the collecting.

Coming to his senses, he decides to burn the collection and resume normal life.

Can he keep some sentimental favourites? Like the last one he collected before his wife left?

The solution is not so straightforward, but allows for a combination of two passions – catfood label collecting and recipes for terrines.

Who is Louis de Bernieres (in the writing world)?

Louis de Bernieres is a novelist best known for Captain Corelli’s Mandolin (1994), whose international popularity has ensured his continuing high profile. But the novels written both before and since that exceptional success are equally worth attention, from his early works of ‘magic realism’ set in South America to his magnum opus Birds Without Wings (2004), which takes an exacting yet compassionate view of the tragic effects of war upon the inhabitants of a small town in Turkey. He is equally adept at capturing the eccentricity and underlying melancholy of lives in English villages, as in the short story collection Notwithstanding (2009).

Writing in all these modes, de Bernieres’ ability to charm the reader is due to the humour he finds in absurdity, as well as the humanity he reveals in his characters. (Quote from Dr Jules Smith in 2013.)

Looking for assistance? Contact the ESA with your research and collection inquiries. Our membership base consists of highly knowledgable experts and enthusiasts.     … END_OF_DOCUMENT_TOKEN_TO_BE_REPLACED

Benefits of membership - two (sometimes only one) journals and four newsletters each year; early bird access to the fair; member rates at ESA events and the joy of being part of a society of like … END_OF_DOCUMENT_TOKEN_TO_BE_REPLACED