You are here: Home / All stories / Missing kookaburras

IN PREPARATION FOR THE ZOOM SESSION THIS MONDAY 11 JULY 2022 7.30PM, Micheal A extracted a series of interesting and sometimes charming images of kookaburras and the war effort.

Right now, since ANZAC Day 2022, Australia Post has published a set of three World War One kookaburras, using postcards in the State Library of Victoria’s Shirley Jones’ Collection. Many of you will remember Shirley and her fabulous collections and knowledge about postcards.

The postcards are these Air Force, Navy and Army:

As Michael spotted they all have No. 58 on the bottom of the card. He also said that the postcards are rare and that it is surprising that there are not three more as sets are usually made up of six cards.

I had already asked postcard collector and dealer Roger Geron if he knew who the artist was. He provided reference photographs of some related cards. Both are numbered No. 58; the first shown below seems to be a homefront card to be sent to a serviceman and the second refers to servicemen ‘scouting’, so again Army? 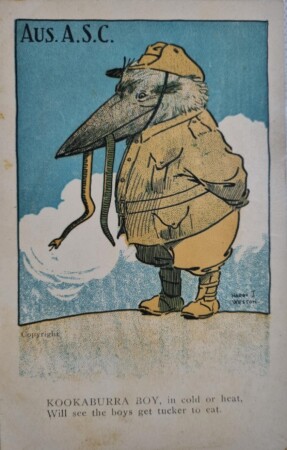 The artist is  Harry J. Weston.  An enterprising commercial artist, mainly posters. Its in the same vein but not doesn’t appear to be the artist behind the N0. 58 set. Any ideas? Join us on the zoom to discuss.

Looking for assistance? Contact the ESA with your research and collection inquiries. Our membership base consists of highly knowledgable experts and enthusiasts.     … END_OF_DOCUMENT_TOKEN_TO_BE_REPLACED

Benefits of membership - two (sometimes only one) journals and four newsletters each year; early bird access to the fair; member rates at ESA events and the joy of being part of a society of like … END_OF_DOCUMENT_TOKEN_TO_BE_REPLACED