You are here: Home / Paper nativity scenes (ephemeral while the idea is eternal)

What is a nativity scene?ORIGIN OF THE NATIVITY SCENE?

According to Wikipedia a nativity scene or creche:

the special exhibition, particularly during the Christmas season, of art objects representing the scene of the birth of Jesus.[1] While the term “nativity scene” may be used of any representation of the very common subject of the Nativity of Jesus in art, it has a more specialized sense referring to seasonal displays, either using model figures in a setting or enactments called “living nativity scenes” in which real humans and animals participate. Nativity scenes exhibit figures representing the infant Jesus, his mother Mary, and Joseph. Other characters from the nativity story such as shepherds and sheep, and angels may be displayed near the manger in a barn (or cave) intended to accommodate farm animals, as described in the gospels of Luke. A donkey and an ox are typically depicted in the scene, as well as the Magi and camels belonging to the Magi described in the Matthew. Several cultures add other characters and objects that may be Biblical or not.

Saint Francis of Assisi is credited with creating the first live nativity scene in 1223 (a “living” one) intending thereby to cultivate the worship of Christ, having been inspired by his recent visit to the Holy Land where he had been shown Jesus’s traditional birthplace. The scene’s popularity inspired communities throughout Catholic countries to stage similar pantomimes. 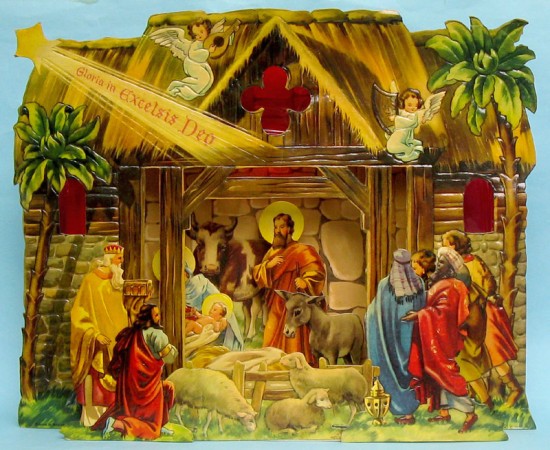 If you want to have your own paper nativity scene next year, visit this site which has reproductions of various chiefly European creches for sale. They have 100s or 1000s of paper models for sale. The one above is from the Paper Model Kiosk site.

We finish with the work of an unknown craftschild or their mother or father.

Looking for assistance? Contact the ESA with your research and collection inquiries. Our membership base consists of highly knowledgable experts and enthusiasts.     … END_OF_DOCUMENT_TOKEN_TO_BE_REPLACED

Benefits of membership - two (sometimes only one) journals and four newsletters each year; early bird access to the fair; member rates at ESA events and the joy of being part of a society of like … END_OF_DOCUMENT_TOKEN_TO_BE_REPLACED