You are here: Home / All stories / Season’s greetings 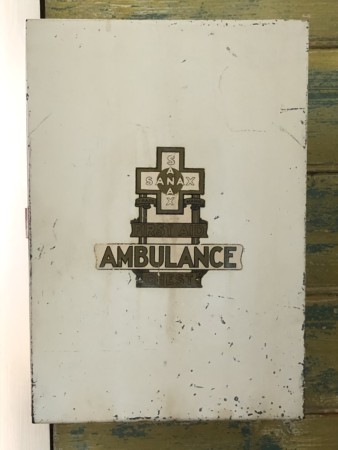 SEASONAL HUNTING AND GATHERING IN YOUR OWN HOME during the flu season, that is. ESA member  David H reports on a ‘find’ from the back of his first aid cabinet.

Season’s greetings, flu season that is: 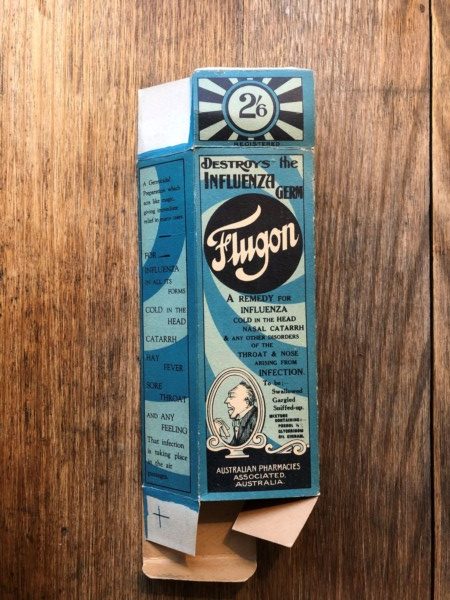 This packet was at the back of a vintage, wall-mounted first aid kit, purchased in 1987 at Camberwell Sunday market. The cabinet was subsequently used as a ‘prop’ to display medical collectables in the first Ephemera Society of Australia exhibition at the State Library of Victoria. Since then it has served as an repository for bandaids, disinfectant, suntan lotion, and insect repellent in a domestic laundry.
A minor finger injury, treated with a proprietary brand antiseptic lead to the re-discovery of the Flugon packet. This was also purchased at Camberwell market, empty and in unused condition. The pre-decimal price dates it to pre 1966, but lettering and almost-deco graphics suggest prior to Second World War.
We will surely look back at the Corona Virus Pandemic of the past few months and however long it takes till a return to ‘normalcy’ as a significant marker of time.
Searching Trove as we do Flugon seems to have hit the shops in 1924.
From  the Southern Argus and Wagin-Arthur Express (Perth, WA ), Friday 6 June 1924, page 2:

FLUGON—The new cure and preventive for influenza. This cure has arrived from Sydney and is obtainable From the Pharmacy. Price 1s 6d *


YOUR CHEMIST IS MORE THAN A MERCHANT.

FLUGON is the remedy you should have handy to prevent it.
One dose gargled and swallowed in the early stages will save you a week in bed.
Two sizes, 1/6 and 1 2/6 per bottle.

DESTROYS THE INFLUENZA GERM.
FLUGON
1/6 and 2/6 a bottle.
A REMEDY FOR— INFLUENZA, COLD IN THE HEAD, NASAL CATARRH

obtainable AT Carr & Co., THE CHEMISTS ON THE CORNER VICTORIA AND WELLINGTON STREETS.

1929 –  the range of benefits increased but the power of Flugon was taken down a peg – no longer a claim that the germ will be destroyed, South Western Times (Bunbury, WA), Saturday 1 June 1929, page 6:

FLUGON THE MOST RECENT AND SCIENTIFIC PREPARATION FOR —
Influenza     Cold in the Head      Sore Throat      Nasal Discharges     Catarrh    Coughs    Colds
AND ALL DISORDERS OF THE AIR PASSAGES OF BACTERIAL ORIGIN.
In Bottles at 1/6 and 2/6 (double size).
OBTAINABLE AT Carr & Co.,
THE CHEMISTS ON THE CORNER, BUNBURY. TELEPHONE 10.

The greatest number of advertisements and the biggest claims for Flugon appear in the 1920s. Advertising dies out in the mid 1940s when still at the price point of 2/6 it is ‘just the thing for those feverish colds’.

Looking for assistance? Contact the ESA with your research and collection inquiries. Our membership base consists of highly knowledgable experts and enthusiasts.     … END_OF_DOCUMENT_TOKEN_TO_BE_REPLACED

Benefits of membership - two (sometimes only one) journals and four newsletters each year; early bird access to the fair; member rates at ESA events and the joy of being part of a society of like … END_OF_DOCUMENT_TOKEN_TO_BE_REPLACED