You are here: Home / All Posts / Toys for Britain (from Melbourne)
SHOW & TELL REPORT from newish member, Paul L., and first time attendee at our February meeting. (At our Show & Tell meetings members bring ephemera of interest to show to others, for advice, comment, admiration.) 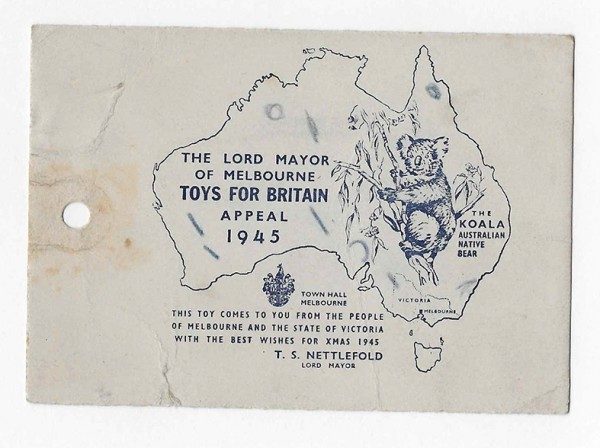 I purchased the Toys for Britain tag from Alastor Rare Books of Hampshire at the PBFA London International Premier Book Fair on 3 June 2017. The vendor was not aware of the provenance of the item.
I undertook some quick research on the tag on the internet. The Lord Mayor’s Toys for Britain appeal in 1945 is referred to in the following:
– State Library of Victoria: images H99. 201/296 to 201/300 (toys being made and completed toys being displayed in Melbourne) and H99. 201/311 (toys being presented in Britain)
– Australian War Memorial: image accession number 112077 – image of some of the 1,600 toys made by the members of the Australian Army Nursing Service, Australian Women’s Army Service and the Australian Army Medical Women’s Service.
– Trove: various newspaper articles including The Argus on 17 May 1945 which referred to the 300 toys made by Pentridge prisoners.

Looking for assistance? Contact the ESA with your research and collection inquiries. Our membership base consists of highly knowledgable experts and enthusiasts.     … END_OF_DOCUMENT_TOKEN_TO_BE_REPLACED

Benefits of membership - two (sometimes only one) journals and four newsletters each year; early bird access to the fair; member rates at ESA events and the joy of being part of a society of like … END_OF_DOCUMENT_TOKEN_TO_BE_REPLACED