You are here: Home / All stories / Unprecedented #11 The Brett Sutton of 1900 Victoria 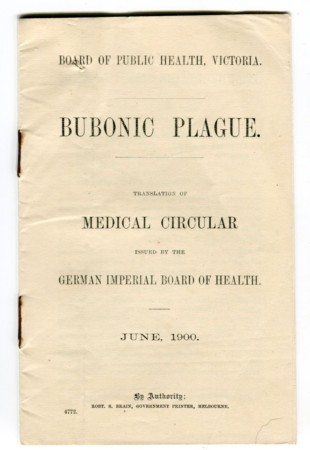 BRETT SUTTON’S ANTECEDENTS? PANDEMICS BEFORE 1919? YES, THERE WERE EARLIER HEALTH CONCERNS WORLDWIDE AND HERE IN AUSTRALIA.

This small, 13 page, 16.4×10.4cm stapled booklet was printed in Melbourne by the Government Printer from a translation by Dr D. A. Gresswell and Dr C. Schleicher.  Dr Dan Gresswell was a remarkable medical practitioner and his story can be read in the Australian Dictionary of Biography.  In 1889 Englishman Dr Gresswell  was made the medical inspector of the new Victorian Board of Public Health. He arrived in March 1890 when an influenza epidemic was raging in Melbourne and successfully managed it. His work led to the appointment of salaried local medical officers, an infectious diseases’ hospital, isolation of patients in sanatoria, and ‘education in management of sputa. The DO NOT SPIT signs built into the walls of many public buildings and the Gresswell Sanatorium are memorials to his campaigns’.  He studied physiology in Würzburg and Bonn in the late 1870s which no doubt led to his identification of and role in translating this booklet. Does he look like Dr Sutton? Probably not, look at a portrait here.

This rather dry but important booklet was treated with enthusiasm locally as it ran to a reprint and was recommended to all householders:

The Board of Health is now re-issuing a pamphlet, published by it in June, 1900, on the plague. This pamphlet is a translation by Dr. Gresswell and Dr. Schleicher of a medical circular issued by the German Imperial Board of Health on the subject. The circular describes the symptoms of the plague, which generally at tacks suddenly and is accompanied by severe constitutional pains. Inflammatory swelling of external lymphatic glands or a pustule, carbuncle or pneumonia may develop at the commencement, or may not be discovered until after death. It will be worth the while of householders to obtain a copy of tho pamphlet. Herald (Melbourne), Saturday 8 March 1902, page 4

DR GRESSWELL AND HIS WORK

A letter, from the Richmond council, expressing warm appreciation of the efforts made by Dr. Gresswell in resisting the bubonic plague in Victoria, was read amid expressions of approval at Wednesday’s meeting of the Board of Public Health. Cr. Shoppee and other speakers remarked that it was very gratifying to find a municipal council expressing itself in this way. After expressing a hope that Dr. Gresswell would take greater care of his health, he moved that the board ask the Minister to induce Dr. Gresswell to take three months’ rest from work. Cr. Forbes seconded, and the motion was supported by Mr. Styles, M.L.A., and Cr. Gearing. Dr. Gresswell, while thanking the board for its kindly suggestion, said he hoped the motion would not be passed. He was quite able to grapple with the work now, and, moreover, the strain was much lessened. In reply, Mr. Styles said the question was whether there was not a danger that the doctor might not break down in the future if his present avidity for work without rest was continued. The motion was passed unanimously. Age (Melbourne), Friday 13 July 1900, page 7

Looking for assistance? Contact the ESA with your research and collection inquiries. Our membership base consists of highly knowledgable experts and enthusiasts.     … END_OF_DOCUMENT_TOKEN_TO_BE_REPLACED

Benefits of membership - two (sometimes only one) journals and four newsletters each year; early bird access to the fair; member rates at ESA events and the joy of being part of a society of like … END_OF_DOCUMENT_TOKEN_TO_BE_REPLACED