You are here: Home / All stories / Unprecedented #6 Influenza 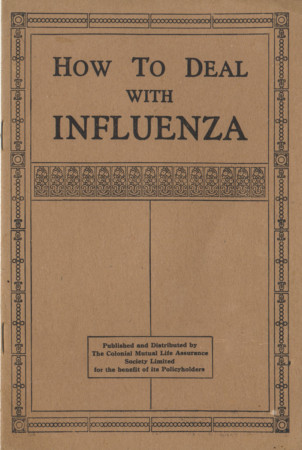 COLONIAL MUTUAL PUBLISHED A SERIES OF BOOKLETS ABOUT HEALTH ISSUES INCLUDING HOW THE INFLUENZA EPIDEMIC WAS MANAGED IN BRUNSWICK, VIC.

This 10 page stapled booklet looks back at the 1918-19 has a simple cover design and may be an early venture. The full booklet is reproduced at the end of this post. The booklet covers: the onset of influenza; treatment; and prevention with a lengthy study of a successful community effort by the City of Brunswick.

The preface notes that the capital cities had ‘no machinery in the shape of emergency hospitals for dealing with any widespread epidemic’. In Brunswick:

The other health advice publications include:

Here is How to Deal with Influenza in full.

Looking for assistance? Contact the ESA with your research and collection inquiries. Our membership base consists of highly knowledgable experts and enthusiasts.     … END_OF_DOCUMENT_TOKEN_TO_BE_REPLACED

Benefits of membership - two (sometimes only one) journals and four newsletters each year; early bird access to the fair; member rates at ESA events and the joy of being part of a society of like … END_OF_DOCUMENT_TOKEN_TO_BE_REPLACED