You are here: Home / All Posts / Wattle Day 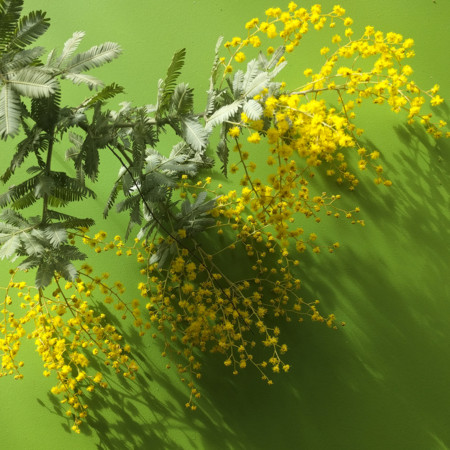 WHAT IS WATTLE DAY? The word from our Australian Parliamentary website is:

Although wattle was associated with Australia from very early days, its significance increased around the time of Federation. The first celebration of Wattle Day was held on 1 September 1910 in Sydney, Melbourne and Adelaide. Plans in 1913 to proclaim the wattle a national emblem and celebrate Wattle Day nationally were interrupted by World War I, but wattle remained a strong symbol of patriotism during the war years. Sprigs of wattle and colourful badges were sold on Wattle Day to raise money for the Red Cross. NSW changed the date to 1 August in 1916 because that allowed the Red Cross to use the earlier flowering and more familiar Cootamundra Wattle rather than Golden Wattle. Wattle was sent overseas in letters during the war and was presented to homecoming service men and women at what must have been an emotional moment.

Love of our beautiful flora

In the 1890s a Wattle Day League was proposed in Adelaide. In 1899, Victorian Railway’s records show that a Wattle Club existed in Melbourne. It asked for, and received concession travel for wattle viewing excursions.

Wattle Day started in Sydney: the Horticultural Notes column in The Leader of 2 October 1909:

There were some who brought up various problems associated with the celebration: In The Argus of 10 September 1909, (yes a month earlier) the nature columnist Donald Macdonald wrote

PRESERVATION OF WATTLES There has been some discussion on the subject of creating public sentiment for the preservation of our glorious wattles. I notice that Mr. A. J. Campbell is giving an illustrated lecture on the subject to members of the Field Naturalists’ Club at the Royal Society’s hall on Monday evening. In Sydney a meeting was lately held, under the presidency of Mr. J. H. Maiden, of the Botanical gardens, to promote a national wattle day throughout the Commonwealth. The same day will not, however, serve the whole continent, because of climatic differences. The idea of holding a wattle bloom festival, like the Nice battle of flowers, does not seem to me at all commendable. It means the destruction rather than the preservation of the wattle.

In Sydney on 1 September 1910. people wore sprigs of wattle, shop windows were decorated with wattle and florists made special displays, wattle trees were planted. In Adelaide, all MPs wore sprigs and sprays of wattle were taken to the Hospital for the Incurables. There was such demand that the florists sold out twice. In Melbourne a gathering in the Botanical Gardens was rained out.

1911- It was celebrated on the mainland on 1 September except for  Melbourne where they marked the day on 5 September. In 1912, Hobart joined in – wattle blossom was everywhere including on the mastheads of vessels in the harbour. In Melbourne wattle was sold in the streets as a way of raising funds for charities; shifting form the focus on nationalism. Country children gathered wattle in their districts and it was freighted free of charge to Flinders Street Station. Mayne Nickless vans transported the wattle free of charge to depots where it was dispersed to young women in white who sold sprigs. Train excursions to areas like Hurstbridge were organised; 960 tickets were sold. City folk spoilt the day with ‘wanton destruction of trees in the Heidelberg district’.

Will we run out of wattle?

The Australasian of 23 August 1913 reported on a concern that Wattle Day would destroy all the wattle trees:

WATTLE DAY FOR CHARITY. The movement which was inaugurated in Melbourne at the latter end of August last year by Mesdames S. T. Staughton and Ross Watt with the object of utilising our national blossom to assist the funds of various charitable institutions has taken a great step forward. Last year the ladies who assisted in organising the movement, and Mr. Bernard Marks (the first hon. secretary), had a strenuous time fighting down the public belief that wattle-blossom would soon become extinct, if it should be sold for one day each year in the streets of Melbourne. This year at the first meeting information was given by skilled botanists that the wattle-trees benefit by having their blossom cut, and all who wished to assist the movement by forwarding blossom were asked to cut it, not tear branches from the trees. The same request through the medium of the daily papers was made the previous year, and in future there is little likelihood of opposition. The day set apart for the second annual campaign was Monday, August 18, a fortnight earlier than the date last year; but nevertheless the weather conditions proved more favourable, for, on September 2, 1912; heavy rain set in before noon, and continued, throughout the day, consequently the collectors did very little service after the luncheon hour. This year the atmosphere was quite mild, though the day was a grey one, and close on a thousand young girls took part in the movement, all wearing white frocks and hats- most of which were ornamented with sprays of the golden bloom. They carried trays slung from the neck by bright ribbons, or baskets, filled with sweet-scented dress and coat sprays…. 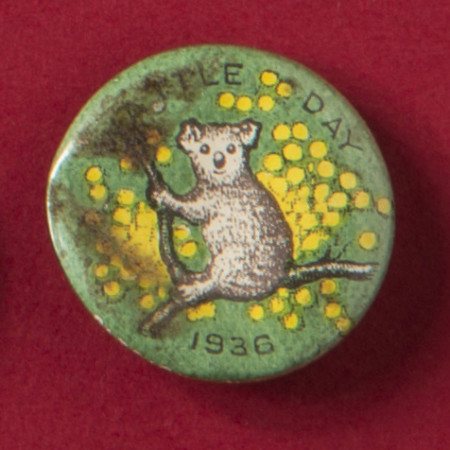 Collection of ESA member Mandy B.

Well, as well as wattle there were badges. the Age 21 August 1915 reports:

WATTLE DAY. The whole of the sections in Melbourne have now been allotted, and those ladies who are helping in the control are requested to call for their boxes and badges on and after Wednesday next. It is under stood that ladies only will collect, and they must be at least 18 years of age. No animals of any description will be allowed to take part in Melbourne in the collecting.

The Wattle Day League, through its president, Mr. Cronin, is taking an active interest in the appeal, and it is practically assured that the full supply of wattle will be available, but as a very large quantity will be required country residents who will forward wattle on the day before the appeal, addressed, ‘Wattle campaign Melbourne,’ will give material help. The honorary secretaries or the organiser will be in attendance at Corameree House from 2 p.m. to 4 pm daily and will be glad to give any information. 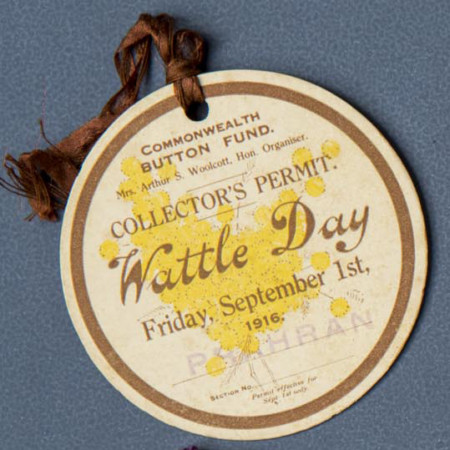 Museums Victoria have a large collection of badges – try the first couple of pages of Wattle Day badges‘ search. There is a nice selection of mainly South Australian badges at the National Museum of Australia.

Wattle Day and the pandemic

From the Hobart Mercury 5 September 1919:

WATTLE DAY. Although Wattle Day has been postponed on account of the influenza epidemic, the president, officers, and members of the Wattle League will meet at half-past 10 this, morning opposite the railway station, and proceed to the Domain, where the annual ceremony of placing the national flower on the soldiers’ memorial will take place. A sufficient supply of wattle blossom has been arranged for, and the whole of the memorial avenue will be dressed with the bloom.

What happened to Wattle Day?

There was skepticism about Wattle Day having the capacity to be a truly national day; The Argus reported in 1933 that ‘it failed chiefly because of the whimsies of the wattles themselves – they are not at their best in every state at the same time’.

The photograph at the top of the post is by ESA member Mimmo Cozzolino, 2021.

Looking for assistance? Contact the ESA with your research and collection inquiries. Our membership base consists of highly knowledgable experts and enthusiasts.     … END_OF_DOCUMENT_TOKEN_TO_BE_REPLACED

Benefits of membership - two (sometimes only one) journals and four newsletters each year; early bird access to the fair; member rates at ESA events and the joy of being part of a society of like … END_OF_DOCUMENT_TOKEN_TO_BE_REPLACED